Where is ISRO located in India

The artist duo STRWÜÜ met in 2014.
They kidnapped a plant, ate for a stop-motion film and performed together with a giant water lily in a pool of water. They made inaudible sound objects, tried to use each other as puppets at the same time and put a stick on a piece of paper a little further for quite a long time. They layered animals in ever-renewing patterns, provided old printers with prostheses and made pigeon flutes circling in a huge hall. They tied strings to form sounds, bridged time to generate space, accompanied industrial buildings as they oscillated and forced air to dance. They robbed fans of their cooling effect, boiled resin to create friction, and sank a mycelium in lamentations. 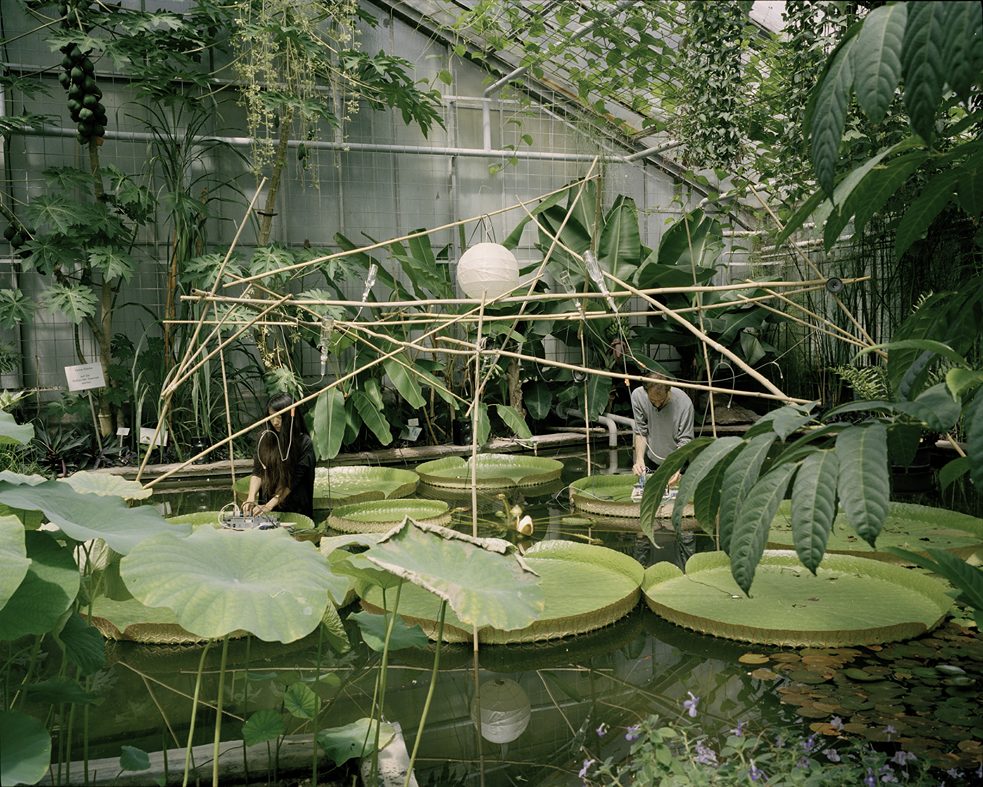 In our opinion, residences are entry points into previously unknown social structures and the artistic community weaving therein. The ingenious construction of the Goethe Institute / Max Mueller Bhavan itself to function as a superordinate structure, which forwards the residents to local institutions, gives a premonition of the well-knit organization of this artist-in-residence.
We were guests at Indian Sonic Research Organization (ISRO). This provided us with a studio space, in which we soon got to know other local actors. After a short time this led to an interaction with Pascal Sieger and Yashas Shetty. We recorded a performance in a Chromakey studio. We took the recordings of this session with us at the end of our residency for further processing.

With the kind support of the Srishti Institute of Art, Design and Technology, ISRO also organized our apartment, in which we lived together with professors and guest lecturers from Srishti during our stay. We enjoyed this circumstance immensely and, as expected, led to some exciting evening conversations on our soon-to-be-beloved balcony, which was sometimes directed in new directions by the local herd of monkeys at the decisive moments. 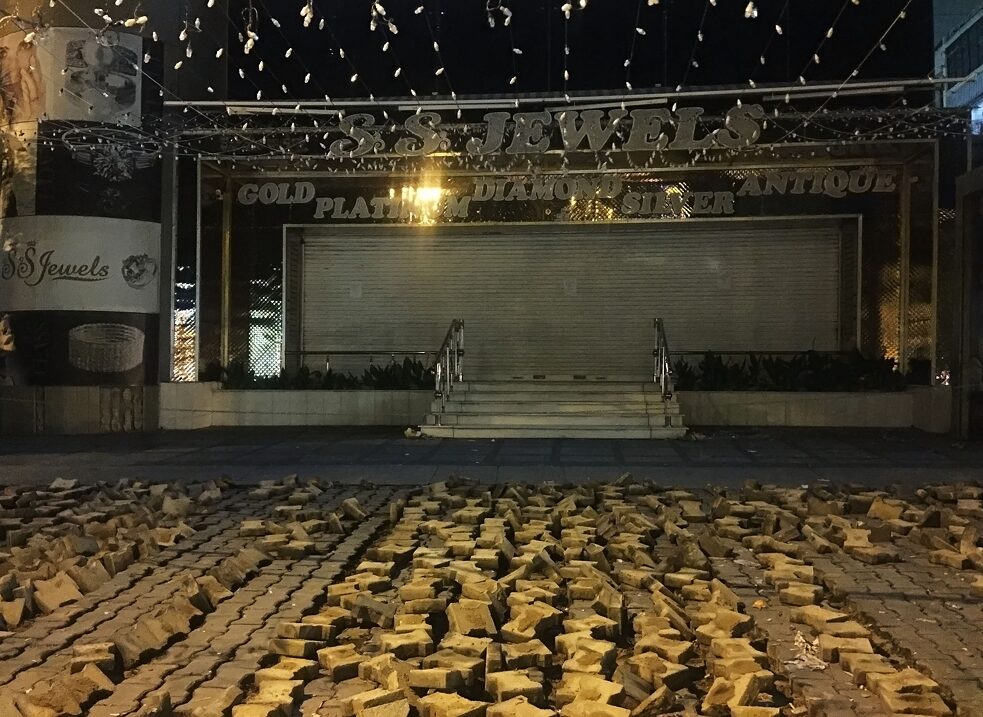 © Jo Wanneng Even if the residents and visitors of Bangalore like to complain about the local traffic, it was a central motive of our interest for us with its own aesthetics and rules.
We had started to tune in to the "local mode" and were increasingly using the local buses instead of taxis to get around the city. This was initially a bit difficult and often led us in the wrong directions or on endless, cumbersome detours until we more and more got the hang of it. We soon got the impression that not only the traffic or local public transport in this city looks chaotic at first glance, but that there are clear rules and principles behind it.

We can only guess at the logistics behind the cosmos of the markets with its thousands of streets and decentralized niches that are overflowing with billboards and an assortment of goods that would scare any shopping center. Others took a closer look at the food suppliers "Dabbawala" in Mumbai. The Dabbawalas leak around 200,000 meals a day and later bring the empty containers back to their place of origin. The entire organization of this system seems almost obscure, but due to its high efficiency and unbelievably low susceptibility to errors, it has been the object of academic studies by Harvard Business School and the India Institute of Management. The processes at the central washing area "Mahalaxmi Dhobi Ghat" are organized according to a division of labor and follow a clear code system.
Above all, however, everything here is first and foremost one thing: a lot! The ancestral stories of the deities are overwhelming or the ideas of what is sacred, the number of languages, almost every family has its own idea of ​​what you can and cannot eat. Everything is interwoven with thousands of rules.
We also started these apparently chaotic organizational systems with the composition rules of Indian Ragas and Talas to compare. The two basic structures of classical Hindustan music for melody and rhythm quickly sound unpredictable and confused to non-Indian ears, but also follow fixed rules which, among other things, precisely define the possibilities of improvisations.
We asked ourselves whether the people here have internalized other types of organizational principles, simply because they grew up with this kind of music, or whether the music is an expression of such structures that have been absorbed through society and whether such phenomena may also be found in other cultures can be found.

During our further stay, our host Yashas Shetty from ISRO organized a visit for us to the laboratories of the National Center for Biological Sciences (NCBS). We met there with the scientists Dr. Mukund Thattai and Dr. Shannon Olsson, who we interviewed about our theses on traffic and regional social organizational structures and who we soon spoke to about the frustration of molecules, virtual realities for insects and the influence of city traffic on the preparation of food.

These observations and discussions were the main impulses for the development of our concept for the complex of topics already outlined in our application: our interest in constantly optimized solutions for everyday situations and things in motion.
We developed three events, which each reflected their own sub-areas of civil self-organization and sonic culture from different perspectives.
A concert that we gave with our drum sound modules newly developed on site on a powerful 4.2 sound system in an abandoned subway tunnel. 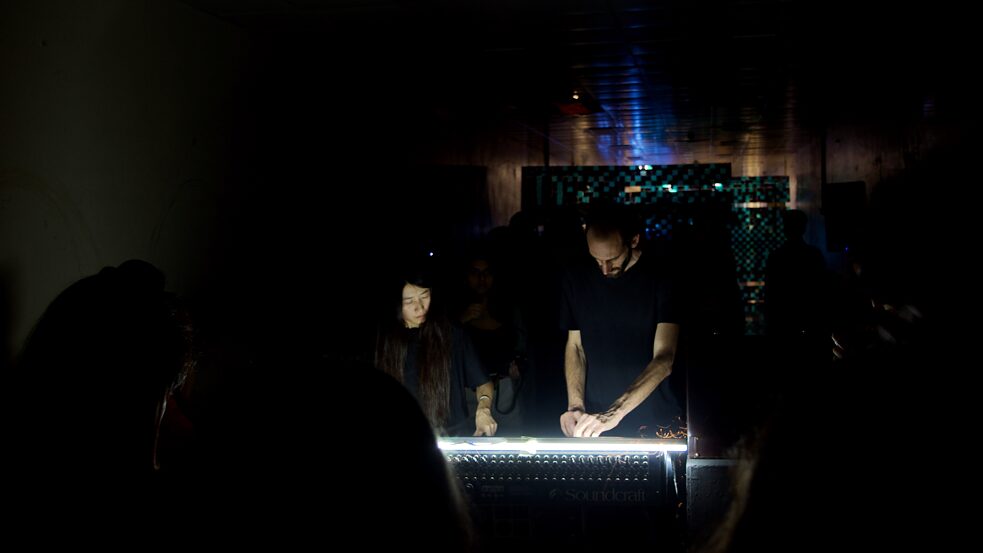 © Sushil Sylvester An exhibition in the gallery of the Bangalore International Center in which we used artistic double pendulums to connect Heidegger's "serenity to things and openness to the secret" with the attitude and chaotic appearance of Indian organizational phenomena in a sound installation. 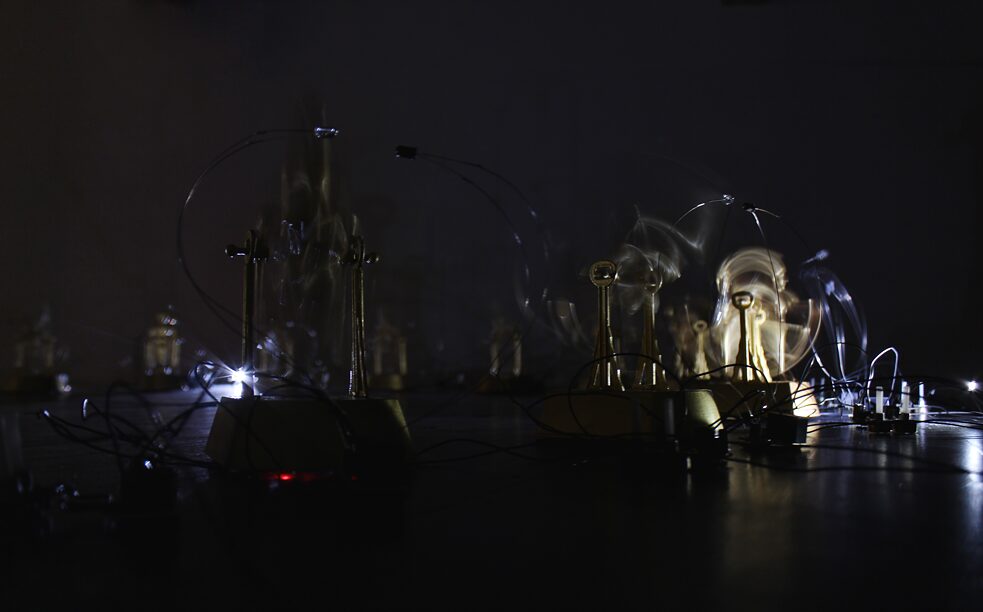 © Jo Wanneng Most recently, we organized an evening at the Goethe-Institut / Max Mueller Bhavan on the cultural and political peculiarities of club culture as a safe space and generator of ideas. The evening was split up into three micro-events: a film screening, a panel discussion and a subsequent music night with regional and international DJs. We understood the event as a communication platform for the situation in Bangalore, which has changed significantly over the last few months and which makes it almost impossible for clubs to continue to exist. The program made references from the local status quo to the rave culture of the early 1990s in England as well as to current events in Tbilisi.
Unfortunately, we had to cancel the event at the last minute due to a last minute announcement by the government that - what an irony of fate - prohibited any evening events for that day. Nevertheless, we would like to thank all artists, thinkers, activists, ex-club owners and DJs who kindly agreed to take part or let us show their films.

All in all, we can say that we perceived the cooperation with the Goethe-Institut / Max Mueller Bhavan as very friendly, highly professional and fully supportive in all areas of our work. We would like to thank Dr. Heimes, Ms. Maureen Gonsalves and Charlotte Rauth from the Goethe-Institut / Max Mueller Bhavan, as well as Yashas Shetty, Mr.P, Mr.N and Sushil Sylvester from the Indian Sonic Research Organization, the Art in Transit team, especially Ms. Arzu Mistry and Yash Bhandari and Mr. Raghu Tenkayala from Bangalore International Center.
<?