What is Android SDK

The Android SDK is available for Windows, Linux and Mac OS and requires a JDK for many of the main functions.

In addition to the tools for developing apps, the following components are available to the user: 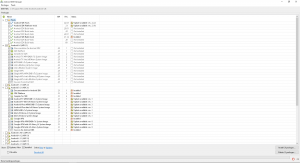 The SDK Manager is a supplied tool that is used to manage the installed, installable and update-capable tools and packages within the Android SDK. With the help of this program, tools such as the platform tools or images for use in an AVD can be downloaded and installed. Available updates can also be installed or the relevant package can be completely uninstalled.

Before the actual installation of a package, it is necessary for some packages that the user agrees to the Android SDK license terms.

Installation on Windows and Linux is covered below.

After the installation, the Android SDK Manager opens. There you select which components should still be downloaded. If you only want adb, fastboot, ddms and a few other tools, you have to select Android SDK Tools and Android SDK Platform Tools.

The components will now be downloaded.

Next, it is advisable to adapt the environment variable so that you do not always have to specify the complete path later (e.g. just adb instead of C: /Programme/Android/SDK/Tools/adb.exe) To do this, click on Windows XP with the Right-click on My Computer and click on Properties. a window is opening. Here you click on the "Advanced" tab, there again on the "Environment Variables" button. In the "System Variables" category, select "Path" and click on Edit. The paths to the tools and platform-tools folders must now be appended to the variable. Do not overwrite the entire variable!

The semicolon that separates the individual paths is important. Don't forget the semicolon at the beginning either! Please note: under Windows Vista, 7, 8 or 10, the process for adjusting the environment variables may differ slightly.

Finished! From now on you should be able to use the Android SDK without any problems.

The Android SDK is not provided by all Linux distributions. A search for "android" with the appropriate package manager provides information about this.

However, there is an excellent script for installation on a Linux system (regardless of the distribution), which does almost all of the work for you[2]. Usually it works in all common Linux distributions.

In addition to automatically changing the required environment variables so that the complete path to the executable files contained in the SDK no longer has to be entered later, the script automatically downloads and installs the Android SDK.

The following commands download the script, set the necessary rights and execute it.

Finally, you can choose which components should be installed. You just want to adb, ddms and fastboot, for example, you only need to select Android SDK Platform Tools.