Why is Assam against CAB

Protest against Migration Law in India: Discrimination against Muslims

The Indian government wants to facilitate naturalization for persecuted non-Muslim minorities. This meets with resistance. 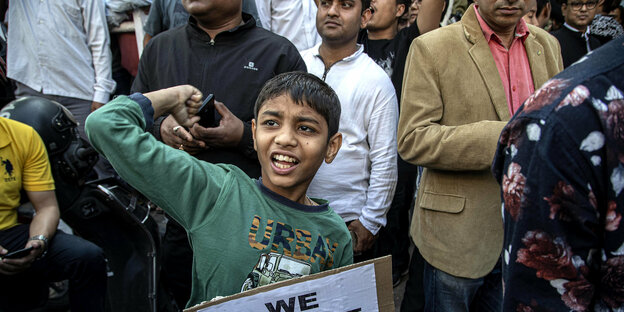 MUMBAItaz / ap | Thousands took to the streets in Guwahati, northern India, on Thursday against a planned naturalization law - despite a curfew in the capital of the state of Assam. The protesters erected roadblocks, ravaged offices of political parties and set fire to two train stations. According to media reports, around 30 people were injured.

Schools, universities, offices and shops were largely closed, and cell phone connections were blocked. Air traffic to Assam was suspended on the recommendation of the government, and additional soldiers were relocated to the state.

The controversial law was approved by the Indian parliament on Wednesday, which aims to make it easier for members of persecuted religious minorities from neighboring countries to obtain Indian citizenship.

Residents of the states of Assam and Tripura bordering Bangladesh fear high immigration. Indian Hindus are the main protesters in Guwahati. They want to protect their culture and their livelihood, which they see endangered by further migration in India's northeast. "In Assam we have an ethnic problem, not a religious one," says a young man from the region who does not want to give his name. Bangladeshis - regardless of their religion - are not very popular there. He is critical of the planned law: "It is not good for a liberal country like India."

For some, however, the law brings hope, for example to the family of Prakash Dewani. In 2008, the Hindu fled Pakistan with his relatives, according to the newspaper Times of India reported. Today he lives near the Indian city of Mumbai. The Dewanis are among the 2,000 Sindhis in the state of Maharashtra who will benefit from the entry into force of the new law and who could quickly become Indian citizens.

The majority in India are Hindu

But the Citizenship Amendment Bill (CAB) has a catch. Because it stipulates that the regulations only apply to members of certain religious groups who immigrated to India from Pakistan, Bangladesh and Afghanistan by 2014, such as Christians, Hindus, Sikhs, Buddhists, Jains and Parsis - so for almost everyone, but not for Muslim minorities.

“The Indian constitution is dead!” Tweeted the political journalist Arfa Khanum, “India is now officially a Hindu state.” She is not alone with this criticism. Human rights activists also see the danger that India will increasingly turn into a religious state modeled on Pakistan. In addition to Human Rights Watch, criticism came from the US Commission on International Religious Freedom (USCIRF).

The institutionalized harassment of Muslims has increased under Narendra Modi's BJP government with its pro-Hindu stance. In this way she wants to please the majority population who are Hindu in India. However, in contrast to its Islamic neighbors, India is a secular country according to the constitution.

The CAB plays hand in hand with another controversial regulation. In Assam, for example, nearly 1.9 million people were deprived of their Indian citizenship overnight through the introduction of a citizens' register. Both Muslims and Hindus were among those who could not prove that they lived in India before neighboring Bangladesh was founded in 1971. The CAB now only secures the citizenship of the Hindus and protects them from deportation.

The government defends its actions. Government spokesman Raveesh Kumar said neither the CAB nor the Assam Citizens Register would aim to withdraw citizenship from Indian citizens of any faith. Critics now only hope that the Supreme Court will stop the implementation. The Muslim League of the Indian Union moved to the Supreme Court on Thursday to declare the law illegal. The text is a blatant violation of the constitutional principle that there should be no discrimination on the basis of religion.